From my previous employer, the Human Resource (HR) personnel used to attach inspirational clippings to every pay-slips they give to each employee. I must admit that most of the times, those clippings go unnoticed and unread in my pay-slips due to my "busy" schedules. It's only now while doing some late spring cleaning that I've sorted through them. To my amazement, some of them are quite cool stuff. Here is one sample of their diligently distributed work.

Go ahead and try it for yourself. This one is entitled TRUE CHARACTER:

The following set of contrasting remarks has been offered as character sketch of a good leader. For a personal challenge, as you read through the list, circle the descriptive words you believe most closely identify you!

Now, try to develop the character traits described in the words you didn't encircle. Leadership is not just a title. It is a set of character that makes a person unique from the rest.

I don't know who specifically was in charge with the selection, clipping and distribution of these inspirational items from our HR then. Kudos to them, the true work horse and unsung heroes, providing inspiration without expecting anything in return. I salute you...although quite late, but still,
THANK YOU!
Posted by Strider at 11:29 PM 2 comments: 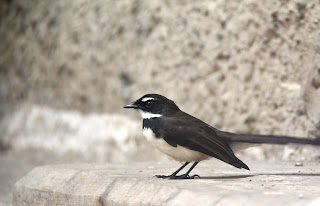 When I started last year with my new job in Cagayan de Oro City, I met this frequent visitor. It flies in every morning in our backyard where I stay. Skipping, hopping around, poking on the various things that it can find.

One Sunday morning, after seeing the familiar bird, I got my camera and took shots of my friendly visitor who gladly posed for me. That was last year...and I have been travelling. I wonder if its still frequenting.

Life might be simple for these birds, but still they are taken cared for. Maybe because they are not complicating things like most people do. Then we can appreciate life more and even find time to pose for a friend.

Have a Great Day!
Posted by Strider at 11:34 AM No comments:

wordless wednesday
Posted by Strider at 12:58 AM 21 comments:

More than a year ago, I visited South Korea and I had the chance to taste this fresh pure Berkshire pork BBQ. In Korea they call it "samgyeopsal" It really taste good, especially when wrapped in lettuce and grilled garlic.

Wordless Wednesday: Looking Outside the Box

wordless wednesday
Posted by Strider at 12:35 AM 20 comments:

It was October 1944 when Gen. Douglas MacArthur fulfilled his promise to the Filipino people. Two and a half years after he left his now famous vow "I Shall Return". In commemoration of that historical return, a life size shrine was built in Palo, Leyte, Philippines.

Too bad we were in a hurry to the airport when I snapped this photo last May 2009. I would have wanted to take a better shot. Yes, the shrine is visible from the highway en-route to Tacloban City.

Our Blog for the Day

"Life is like playing a violin in public and learning the instrument as one goes on." ---Samuel Butler